Menu
Log in
Register
Install the app
You are using an out of date browser. It may not display this or other websites correctly.
You should upgrade or use an alternative browser.

I've been trying to find more of this girl who, apparently an amateur, appeared in several Party Hardcore episodes. She always seemed eager to flirt, and occasionally jerk a stripper, but held off from ever doing anything else. In the very opening of Vol 79, Part 1 she is seen doing up her bra and getting her clothes on, so she had obviously been naked for the pre-show activities. I'd like to see more of her or know who she is! Thanks!

Anyone have any ideas? I have a ton of pics of her, and for an amateur she sure was featured in several PHC episodes without showing much skin. I keep expecting to see her on CzechCasting or something like that, but I guess she was just a wannabe. Certainly good looking, though...
T

wildwilly411 said:
Anyone have any ideas? I have a ton of pics of her, and for an amateur she sure was featured in several PHC episodes without showing much skin. I keep expecting to see her on CzechCasting or something like that, but I guess she was just a wannabe. Certainly good looking, though...
Click to expand...

Don't know who she is. But if you've see vol. 79 then you must have seen part 5. In this part she does take a load on her neck. Other than that I haven't seen her do any full sex.

Yep, that's the closest she came to really getting involved. I'd love to find the video of the pre-show activities for Vol 79. We know she was naked (at least topless), and I have a feeling from what we've seen, her tits are great! Too bad she wasn't a little more daring!
W

Here's a few more for your viewing pleasure...

Thanks. I know they started posting the individual CAMs from older parties. So we know the footage still exists. I keep looking on various forums in case they post any of these from some of my favourite parties. I haven't looked on the official website for a while, but last few times I looked, they seem to have stopped naming the parties with the older number systems, so it's not easy to identify which party they are from. I'l keep my eyes peeled for this girl.
W

She's certainly worth looking for! A real hottie!
W

The bottom line is that she's probably an amateur that appeared several times on Party Hardcore, and I'm sure the PHC folks hoped that she'd loosen up and start doing exciting things. It would be interesting to know if she appeared on any other Euro sites, or was a member of Czech Casting or other such groups. Given the number of hits on this post, there are others out there that are interested in her also. If anyone has any information of other appearances or missing PHC footage of her, please let us all know!
W

I've had almost 900 hits on this topic, so I know that this girl sparks interest, but it's hard to believe that there's no further info on her! Post your pics and info if you have it!

More pics from Party Hardcore Vol 79, Part 1. In the one where she's standing by the blonde in the red dress, you can see that she has a tattoo under her left boob.

No luck at finding more information or pictures of her... I want to thank everyone for looking at this. Over 2K looking, so there's interest, but not info! Let's keep trying!!
W

Great shot of our girl's beautiful ass! Somebody in Eastern Europe surely knows her!

This is your model when she was younger >https://www.indexxx.com/m/barbie-girl<
"Barbie Girl" aka Romana
iafd listing -- https://www.iafd.com/person.rme/perfid=romana_12/gender=f/romana.htm 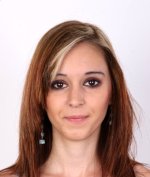 Thanks, but she's the wrong girl. But she was in Party Hardcore Vol 79!
This is the girl I'm looking for:

When I started this quest to find more photos/vids of this girl I didn't think it would be this difficult! I assumed that she was an amateur, but she was in 3 or 4 Party Hardcore vids and was seen at the very beginning of Vol 79 standing in the crowd by the stage, getting dressed. Another girl was fastening her bra, so she obviously had been naked on stage prior to that. IMHO she's a beautiful girl, she was there getting naked in public, and obviously knew she was being filmed, and I assume that she realized she was putting herself out there for all to see. There has to be more stuff somewhere out there. Tainster, put some of that earlier footage up!! LOL, I know it'll never happen, though!
W

Just after I wrote the above reply, I found this weird picture of her with a guy wearing a cock cage. I can't imaging a scenario like that on any of the Party Hardcore episodes. Anyone recognize this scene?

So, I found this thread yesterday and I've done some research. Just to start, I don't know her name, but I've found a couple other Party Hardcore Gone Crazy episodes she is in and clear up some confusion of the pictures that are posted here.

Alright, so first off, from what I could find so far and looked through, I found her in 5 episodes so far, in Vol 4, 6, 7, 22 and 79.
Ok with that out of the way, I'll clear up the bra and panty pics. I strongly believe that it's the same night as episode 79 and I'll tell you why.
If you look at the first pic of wildwilly411's post on feb 19th you'll see her fixing her bra. Next to her is a girl in a red dress, which I believe is the same girl dancing behind the guy in the third pic in the same post. Unfortunately we don't see the watch but could be her.

Now I adress our mystery girl with the same idea. In the bra and panty pic she has a black watch and a red wristband on, which you can also see clearly in the same other pic with the dancing guy where she is also still fully clothed in. That's episode 79 later that night, which I'm not sure off if there is any footage of it out there.
Other than that you can also check the same pics and compare the shelf and what's on it in the background, it's the same aswell.

The only episodes/scenes I haven't found so far are the one with her getting her tit pulled out (which still could be episode 6 but the video I saw of it that particular scene wasn't there), the one in her dotted top in any form and the full one in her white shirt. I only know she is in episode 4 because I found the cover art of the episode which she is on.